How to Create an Interactive SMS Form with Magpi Print 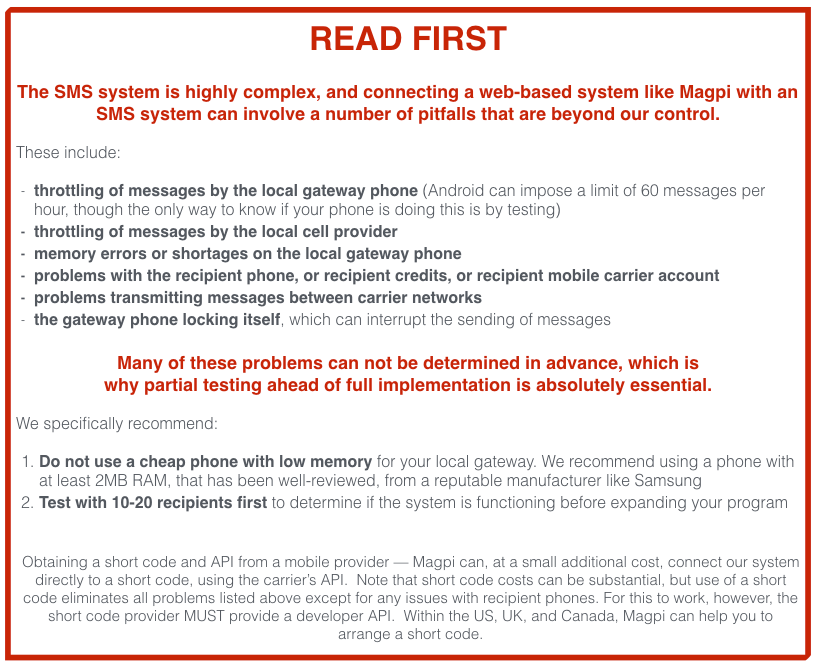 Magpi has two ways to collect data using SMS/text messaging: structured and interactive ("iSMS").  To learn more about the general differences between them, click here. This article will explain how create an iSMS form in Magpi, comparing it with the creation of a form for use with the Magpi mobile app.  After reading this article, you will want to proceed to How to deploy an interactive SMS form with Magpi.

If you have ever created a Magpi mobile data collection form, then you already know 90% of what is needed, because iSMS systems use the same forms as you might already be using with the Magpi mobile app.  If you don't know how to create a Magpi form, please watch our Magpi Data Collection Basics intro video.

Example: Collecting Name, Gender, and Age from Every Clinic Visitor

As an example: suppose you want to create a simple form to allow a health worker to report the name, gender, and age of every person who comes to the clinic requesting information on HIV medications. If you were going to have that health worker use the Magpi app on a smartphone, that form might look like the image below in the Magpi form designer (you can right-click the image to open it larger in a new browser window or tab). 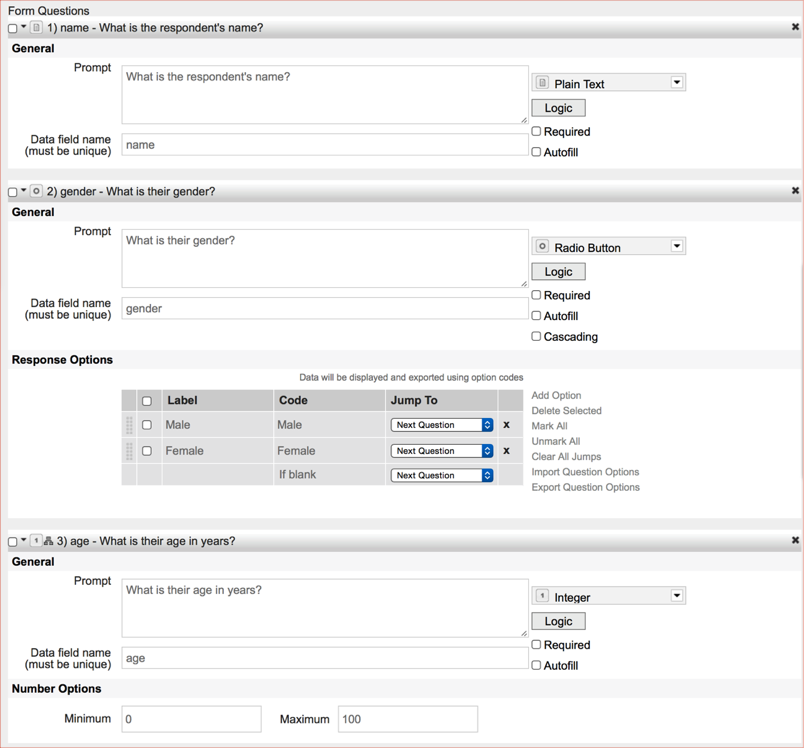 Notice that the questions are written for a data collector to collect data about someone else (the "respondent").  So, for example, the form asks "what is the respondent's name?" The idea, of course, is that a data collector with a mobile phone or tablet will run the Magpi app and open this form in that app.  Then they will go to the person of interest (i.e. the respondent) and ask the questions of them.

iSMS can be a little different.  Although the form above could be used for iSMS, with a data collector asking questions of a different person, with iSMS their is the additional possibility that the person entering the data (the data collector) might be the same person as the respondent: they may be answering questions about themselves.

If the iSMS system is meant to allow people to answer questions themselves, the same form might look more like the next image.

Basic Form for Use with iSMS (data collector = respondent) 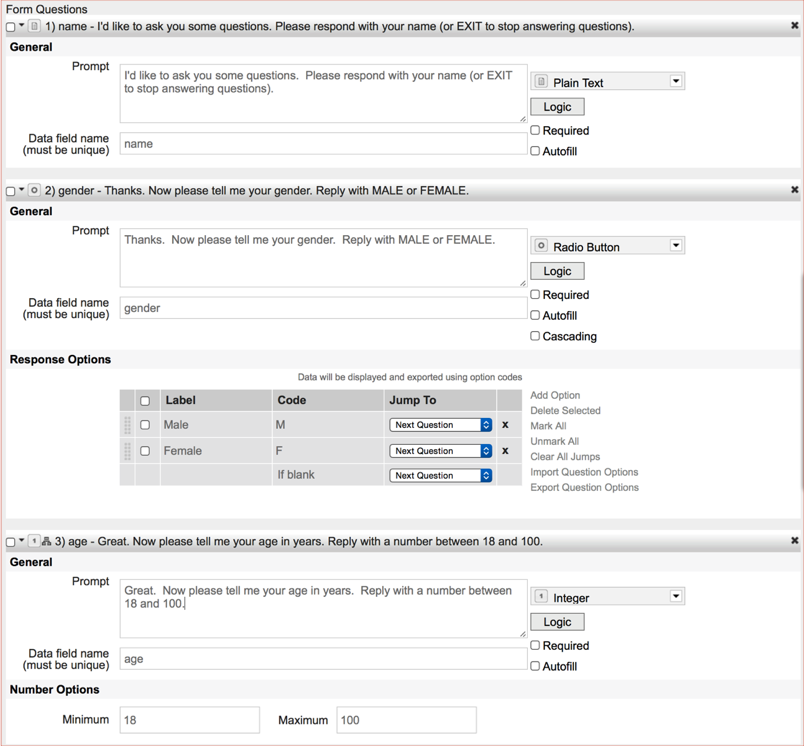 Notice that the tone is more like a conversation, because with iSMS the respondent is having a conversation with the Magpi system -- with no intermediary data collector.  On a phone, this iSMS might look like this (Magpi's messages are the ones in gray): 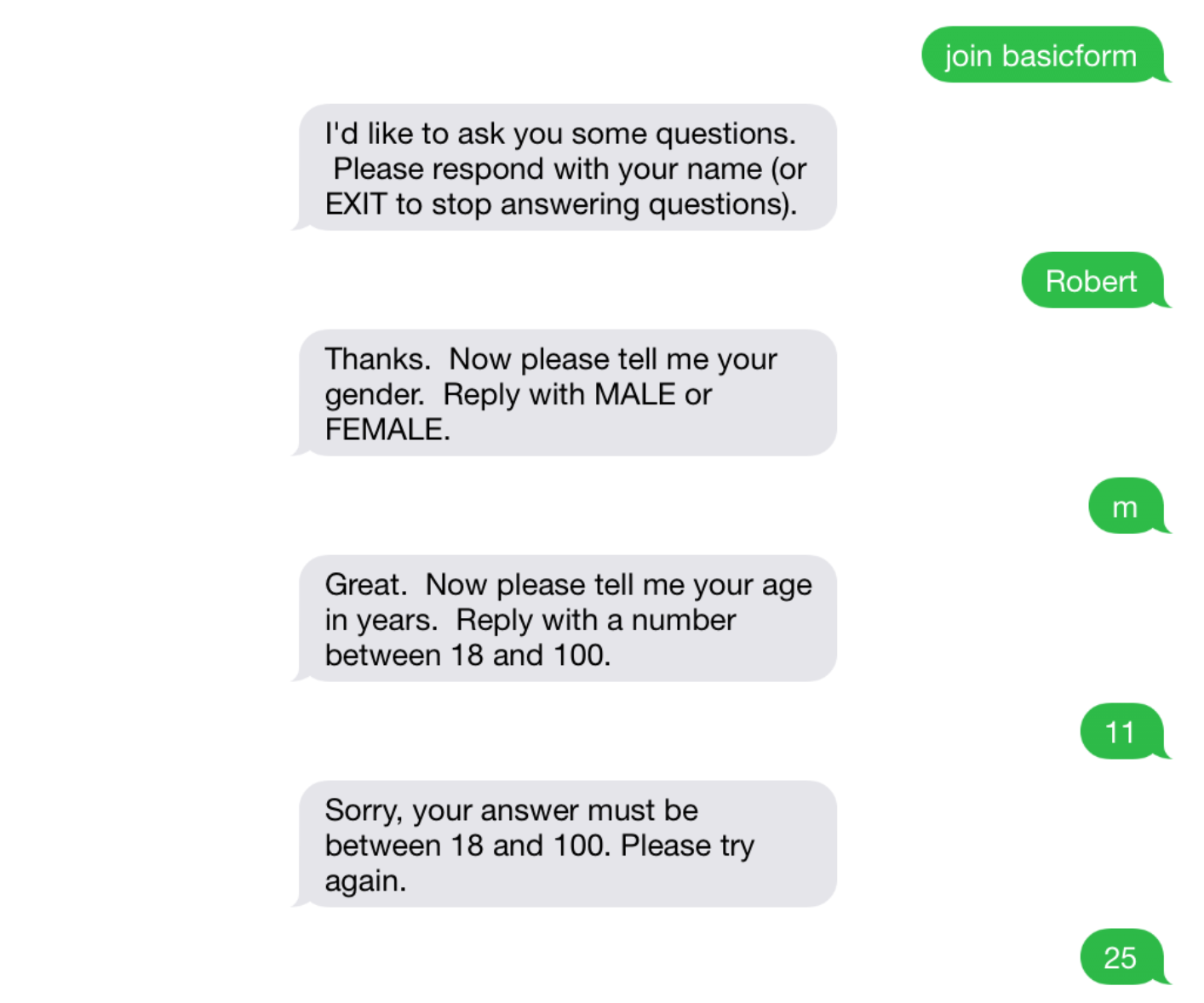 You'll notice a few things in the iSMS "conversation" above:

The last thing you may notice is that there are no closing words in this iSMS.  From the Magpi perspective, the data collection form is finished, so it just stops.  But for the respondent, this can be confusing: they may be waiting for further questions.  So it's always best to add a closing label question, like this:

Now that you understand how to create a Magpi iSMS form, you will want to proceed to How to deploy an interactive SMS form with Magpi.