As of November 2017, Magpi has released a new Magpi+ ("Magpi Plus") mobile app for both iOS and Android.  While the existing Magpi mobile apps for iOS and Android will continue to be supported, the new Plus app has significant improvements in interface and features, including new question types.

Question types that are available only when using the Magpi+ app include:

How to Tell if a Question Type is Only for Magpi+

When designing forms, you will see Magpi+ questions indicated in two ways:

1 - in the New Question menu, Magpi+ questions are shown in red: 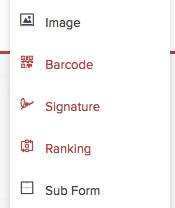 2 - after adding a Magpi+ question type, you will see this message shown in the question body (with a "read more" link):

Additional new Plus question types will be added in 2018. Learn more about Magpi Plus.

J
Joel is the author of this solution article.